Roller skating or Rollerblading is a form of transportation, a sport and a recreational activity. You can skate with quad roller skates or blades (inline skating).

There are competitions and shows where rollerblading or skating is incorporated with dance and acting. You can also speed skate, group skate, play in roller hockey or roller derby. This can be a sociable sport played in teams or a lone hobby skating along a beach front promenade. If you learn how to rollerblade, you will find it easier to ice skate, as the principals are very similar. Rollerblading or skating is a portable hobby with reasonable prices to get started. It is a great way to get fit and enjoy the transportation benefits whilst taking in new scenery.

Unless you’re a roller skating guru, you might not be aware of the different types of rollerskates that are available and what they are designed to do. Among the different roller skate types you will find are Artistic, Jam, Speed, Derby, and Rhythm. Depending on what style of quad skating you plan on doing, you will want to get the appropriate skate style for it.

Artistic SkateArtistic skates are used in many different skating disciplines, but the easiest comparison is to that of a figure skate used on ice. Artistic roller skates are composed of a leather boot, very strong sole plate, and a jump bar that adds additional reinforcement. Like ice skating, an Artistic skate is used on a roller skating surface for single free skate, pairs skating, solo dance, pairs dancing, precision or synchronized skating, and show teams. Although each of these skate disciplines is different, the common thread that they share is the use of an Artistic style quad skate.

Artistic skaters need a skate that is strong enough to withstand the force that is exerted on the skate when jumping or landing. The boot on artistic skates is higher than those found on other quad skates. The boot sits a few inches above the ankle providing more support and stability for the foot.

Jam Quad SkateJam skates are different than any other type of rollerskate because of its unique low-cut design and lack of toe stop, that’s right, no brake. The original jam skate design was actually much different, resembling an artistic skate with a high-cut artistic-style boot and tradition toe stop brake. However, over the years, the design has transformed into a skate that resembles the picture to the right. The modern skate design features a low-cut speed skate boot and a dance plug in placement of the toe stop. They feature lightweight frames for fast, agile movement for the skating style associated with jam skating.

As a skating style, Jam skating is a combination of dance, gymnastics, and skating. Jam skating’s roots stem from the roller disco days of the 1970s, but over time it has evolved and been influenced by multiple sources of artistic outlet. Modern dance, artistic skating, and break dancing have all contributed to the jam skating style of today. For jam skaters, jam skating is more about personal expression rather than aggressive or speed type of skating. The free flowing movements of jam skating have been given countless names such as hexing, shuffle skating, toe-skating, and spot skating. But regardless of its name, jam skating has always been about expression and passion.

Quad Speed SkateMost people instinctively think inline skates when they hear speed skates. The truth is that speed skates are available in both inline and quad form. While inline speed skating is more common and more widely recognized, quad speed skating is extremely popular. A speed skate features a boot design that more closesly resembles a shoe. A speed skate will fit closely to the fott and have very little padding, increasing the foot to boot ratio. The cut of the boot is lower and will usually sit around the ankle bone, or underneath it. The design of a speed skate creates tremendous maneuverability and freedom of movement.
From a usage standpoint, speed skates are intended to be used in lap skating, time trials, sprints, relays and marathons. They typically offer lightweight plates to reduce fatigue for skating long distances. In recent years, jam skaters have also taken to speed skates because they offer a similar design and freedom of movement. The most notable difference being that a speed skate features a toe stop, unlike a jam skate that uses a toe plug.

Roller derby is a worldwide sport that many people know about, but may not fully understand. While I won’t go into detail about the particulars of the sport, just know that roller derby is a contact sport that utilizes strategy and strength to win. Derby skates are designed specifically for use in the sport of roller derby, though they resemble the everyday rollerskate design.

Derby skates feature a low-cut boot design with a lace up closure and Velcro strap to properly position and fasten the foot in place. The boot design itself has more padding than a speed or jam skate so that it can withstand the bashing and bumping that roller derby entails. Derby skates can also be equipped with accessories to protect against injury, as can be see with the skate to the right.

Rhythm skates do not have a traditional toe stop brake, but instead features a dance plug like a Jam skate. If you want a skate that allows you to move to the beat, with added ankle support, the Rhythm skate is the ideal choice.

Now that you have all the ammunition to make your choice of what type of skating you are mainly interested in take a look at the skate styles to see what type of skate best suits you. Get out and get rollerskating today! If you are ready to pick up a new pair, go to RollerSkates.net. You can find many different styles, colors, and sizes at every price range.

The Benefits Of Skating For Kids 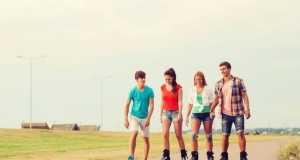 Visit Reborn Marketing for all of your Marketing & Media requirements. We specialise in Websites, Social Media Management, SEO, Branding and more. As a Marketing Agency in Witney, Oxfordshire, we are dedicated to helping you achieve success.