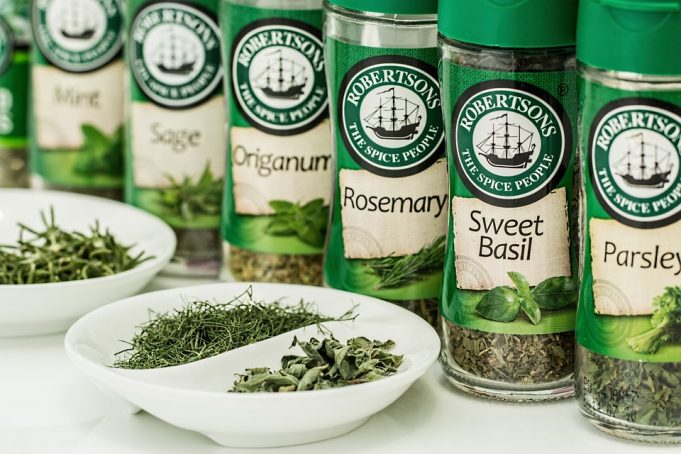 The word nutrition means many different things to many people. Though I would never tell anyone how they should or should not eat as I see diet as a personal choice that one has to make based on tastes and personal and/or religious beliefs, I do believe that herbs used in cooking not only enhance the taste of the food but offer numerous health benefits as well and can be used no matter what type of diet or food pyramid you eat by.

Herbs have been used to season and preserve food since prehistoric times and are widely mentioned in the bible. Without science and research to guide them, our ancestors learned through experience, trial and error that herbs not only made their food taste better but that herbs used in cooking also helped to prevent and fight infection and illness. Why not season our food with both taste and better health? Here is a list of common culinary herbs and the health benefits they offer.

Let’s take a look at some of the most common ingredients in your kitchen and spice cabinet. Garlic, which is used worldwide for both culinary and medicinal value, is a powerful antibiotic that has no side effects and which, unlike pharmaceutical antibiotics, does not kill off the body’s good bacteria. This is great news for garlic lovers but unfortunately the antibacterial action of garlic is only present when the garlic is raw or just barely warmed. For people who like or can tolerate the taste of raw garlic it can be applied liberally to any dish or soup just before serving for it’s value in fighting an existing infection or to boost the immune system to help prevent infection. Raw garlic added to soups and spaghetti sauces during peak cold and flu season can help to prevent or cut the duration of these illnesses. (For people who hate the taste of garlic but want it’s valuable medicinal aid, they can take garlic capsules or take garlic footbaths instead.) Garlic has also been proven helpful in lowering cholesterol and improving immune function and is undergoing research at this time as an anti-cancer herb, all the more reason to sprinkle raw garlic over your favorite dishes and soups.

Basil is another valuable herb to use in cooking, not only for the spicy flavor it offers but also for its help in lowering blood pressure. Basil goes great with italian dishes as well as meat, eggs and pasta and, when eaten regularly, can help to control mild hypertension. Basil also acts as a breath freshener and, hung in bunches around the kitchen, is a great fly repellent!

Bay, a staple in every kitchen, known for the flavor it adds to many dishes, soups and stews, is reputed to help chase away cold and flu symptoms when used with peppermint.

Cayenne, a popular spice, is a great addition to any food you want to “heat up” and aids in blood stimulation and circulation, great for people who suffer from cold hands and feet. Cayenne is also reputed to help with painful conditions like arthritis. Some leading health experts also claim that cayenne, when consumed in small amounts with each meal, will aid in weight loss and stimulation of the metabolism, a couple more good reasons to include it in your cooking besides the flavor and zip it will give to your meal!

Chives and onions are tasty herbs and can be added to almost any dish. These common kitchen staples help to improve the immune system, fight viruses and are also helpful in lowering blood pressure. Chives are best fresh and added to food just before serving and are great with potatoes, fish, soups and stews, most meat and in salads. Onions go great with almost everything and should be eaten as much as possible to help overall immune system function.

Dill, the seeds as well as fresh or dried leaves, adds flavor to fish, eggs, pickled foods, potatoes and cucumbers, to name a few. Dill is also known to aid in digestion and to relieve flatulence as well as freshen breath; so don’t forget this herbal ally when you are cooking! Due to its help in relieving flatulence, dill is good to use when you are preparing gas-forming foods.

Parsley, perhaps the most used but least appreciated of the culinary herbs, is packed with vitamins and is a good source particularly of vitamins A and C. Parsley is also a good source of iron and is considered by many health and nutrition experts to be the “herbal multivitamin.” Parsley is best known as a garnish but adds flavor to soups, meat, fish and vegetable dishes as well as salads. Perhaps when cooking you can not only try adding parsley to the meal but also do what the restaurants do and place a nice parsley garnish on each plate. This will give an added source of nutrients and vitamins and chewing on the parsley after the meal will freshen the breath and clear the palate.

Sage, the “thanksgiving” herb, known for its use in stuffing and poultry dishes, is a powerhouse of herbal medicine. It acts as an antiseptic that can be very helpful in treating many conditions, particularly infections of the mouth and throat. Sage should be added generously to food, especially soups, when one is fighting illness or infection. A warm sage broth can help to relieve sore throat, painful gums, canker sores and laryngitis, so keep it handy!

Thyme, a widely used favorite, is a valuable herb in fighting colds and coughs and adds flavor to meat, fish, vegetables and potatoes. This is another herb to use more of during peak cold and flu season to help the immune system keep illness at bay.

Savory, both the winter and summer varieties, are a wonderful addition to lentil and bean dishes, stews, chili’s and even spaghetti sauce. This is a very flavorful herb that adds a tasty depth to bean soups as well as giving baked beans an incredible flavor. Mother nature used good old-fashioned common sense when she made this herb to go well with bean dishes; because of it’s anti-flatulence qualities savory is a great partner for those delicious but notorious gas causing bean dishes!

Rosemary, a woodsy and pungent herb, adds a rich dimension to meats as well as stews and soups, fish, stuffing and even chocolate cake! What rosemary also does is fight headaches as well as memory problems, a great health benefit to go along with the great taste of this herb.

Oregano, another “italian” herb, is great added to italian recipes as well as eggs and stews. But according to James A. Duke, PHD, oregano’s best value is in its ability to fight conditions such as hypertension, asthma and arthritis. Obviously, adding oregano to your meals can help with more than just extra flavor!

One of the main things to remember when cooking with herbs is that, in general, most should be added in the last 15 minutes of cooking to retain flavor and medicinal value. Some herbs, such as savory and rosemary, can be added early in the cooking process because they do not as quickly lose their flavor, but for true medicinal purposes, it is best to add a bit in the last few minutes of cooking as well.

The mints are wonderful herbs for cooking and baking and have a variety of medicinal virtues such as aiding in digestion, easing nausea and treating halitosis (bad breath). Mint goes well with fish, lamb, poultry and pork as well as being a delightful garnish for many dishes and desserts.

Let’s not forget the sweet spices that you use in baking and occasional cooking that can be used to please your taste buds and improve your health. Cinnamon, a sweetener that is safe even for diabetics and contains no calories, is a great herb for regulating blood sugar. As little as one teaspoon per day of cinnamon can help to regulate blood sugar, helping to keep sugar levels from spiking and/or dropping. Diabetics as well as people with hypoglycemia (low blood sugar) should incorporate cinnamon into their cooking and baking as much as possible to help regulate their glucose levels.

Ginger, another popular baking spice, is renowned for it’s ability to fight nausea and dizziness. In double blind research studies ginger has proved to be more affective against nausea and motion sickness than Dramamine, one of the best selling anti motion sickness drugs in the world. That is why when you were a kid with a tummy ache Grandma’s ginger snaps made you feel better.

Cloves are another wonder drug in the form of a sweet and earthy spice. Cloves provide relief from pain and are antiseptic, being especially helpful with dental pain. A whole clove placed on an aching tooth will alleviate the toothache within seconds. Cloves are used in cooking too, especially in Middle Eastern cuisine, flavoring meat and vegetable dishes.

Turmeric is a spice that is also used widely in Middle Eastern cuisine and is quickly gaining popularity in America. Turmeric has been known to help relieve pain in arthritis as well as showing promise in the treatment of diabetes, making it worthwhile to experiment with in your own cooking!

Lastly, for people who need to watch their sodium intake, here is an herbal salt substitute blend that is used in place of salt and adds wonderful flavor to most foods. If you don’t have access to any of the herbs in the recipe just use what you do have. Your seasoning blend will still have plenty of flavor. This recipe uses dried herbs:

Blend herbs well by hand or in grinder. Store in airtight container away from heat and sunlight. Use instead of salt for great tasting food without the problems sodium can sometimes cause.

Have fun trying different herbs and spices in your cooking and give thought, when you have the sniffles or a loved one has a tummy ache, to which herbs may help to alleviate the symptoms and incorporate some natural medicine into your meals for better taste and better health. Happy and healthy cooking!

Cooking Tips For All

Some Food Tips For Better Cooking

Herbs in the Kitchen

How Many Different Ways Can You Cook a Chicken? 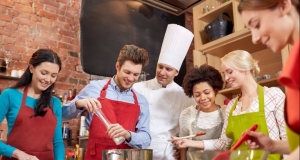