The history of swimming goes way back to that of prehistoric times. Books written from 2000 to 1500 BC including the Bible have references to swimming. It was mostly used in these times as a means of cleansing. Any form of competitive swimming wasn’t formed until the 1800’s in Europe. It was included in the first Olympics in 1896 in Athens, Greece.

It was noted that Ancient Egypt had cave drawings of humans swimming in the nearby sea. They often depicted a form of the breaststroke as the first type of swimming or something they used to call the front crawl. Ancient Egyptian, Grecian and Roman palaces were often equipped with swimming pools or baths. Often reserved for the elite that used them as relaxation pools and cleaning tubs.

It is noted by historians that swimming was also often used in battle. The Greeks were often regarded as solid swimmers and at the Battle of Salamis after a number of both Greek and Persian boats were destroyed it was said that all of the Persians drowned due to their inability to swim while the Greek prevailed.

The history of swimming is much easier to understand than other sports. Without any equipment to speak of an individual can take to the waters. Obviously those countries that had the most access to water were the first to adapt to swimming. History did not have the spreading of the sport as many other sports had encountered because it was basically already available. You either adopted swimming as a means of life or you just chose not to swim.

The evolution of swimming history expanded during the middle ages. A number of individuals took it upon themselves to write books about swimming. They were often focused on the ability to not drown rather than a perfect backstroke as you would imagine. Life saving concepts and techniques began to form throughout the next few hundred years and around the 18th and 19th century the sport began to evolve into more of a competition than just life safety. Swimming Associations and Clubs popped up all over the world. Some of the first in swimming history were in China, Sweden and Germany.

Schools began to believe that swimming was a natural part of any life education. Therefore, they began to teach swimming in schools not just as a life safety course but as an extracurricular activity. Schools and Universities began to adopt these practices and set up clubs and swim teams. Competitions began to arise around the mid 1800’s. England was the first to modernize the sport and incorporate an indoor swimming pool with a swim team. They began to formulate new swimming styles including the sidestroke. Shortly after this, variations of the freestyle began to form and credit can’t really be given to one person as so many were responsible for developing this technique.

The Olympic Games of 1896 in Athens was the first real platform for the sport. There only men competed in a number of events. Throughout the 1900’s the sport evolved and saw a number of stars arise. Johnny Weissmuller, the original Tarzan completed his ten year career by never losing a race and winning five Olympic medals.

Science and technology began to play a part in the sport throughout the 1900’s as well. When scientist and coaches began studying swimmers and there underwater techniques to improve times. The swimsuits began to change as well as any form of resistance was under scrutiny from all competitors. Goggles, swim caps and different variations of training have all evolved as well. The US has seen its share of great Olympians going back to Mark Spitz who won seven gold medals in the 1972 Olympics.

The sport has evolved to a very competitive and fun sport for anyone. That has always been the great appeal that anyone can swim and we have been for the past 3000 years…So goes the history of swimming.

Some Healthy Plus Points Of Learning Effective Swimming 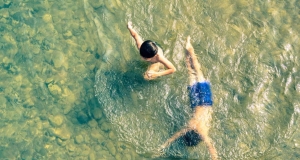