The day after I arrived, I went down to Emperor Divers to check-in. As I got there, I met one of the instructors, Davorin, who was one of the dive leaders when I was here last time. Just over a week ago, a bait ball was sighted off Middle Garden being feasted on by 3 or 4 whale sharks. I had heard about this before I left England and Davorin said that it was an incredible sight. None of the instructors can ever remember seeing anything like this around Sharm before. Some people say the plankton bloom is a bit higher than normal (which would encourage the whale sharks to stay around) but what was apparent from our brief chat was that there does seem to be a lot of good marine sightings at the moment in Sharm. I’d booked 8 days diving so I was hopeful I’d be able to put my camera to good use at some stage over the next fortnight.

The first days’ diving with Emperor Divers is always at a local dive site. This just lets you get a feel for diving again, allowing you to perform a weight check and get back in the swing of things. The following days, you are free to chose where you want to dive. After breakfast, I headed over to the dive centre to sign in for the day. I chatted with a guy called Ian whom I had dived with before in Sharm. He was heading down to Ras Mohammed and I was going to be on the Empress Theresa with dives scheduled to the north of Sharm at White Knights (next to the Savoy Hotel) and Ras Bob. But the disaster struck, as I was getting on the bus, I somehow managed to drop my camera. Thankfully, the camera house wasn’t damaged which meant it was still watertight but the colour correction lens was cracked and the camera wouldn’t switch on. What a nightmare – I was going to be without my camera underwater for the first time for ages. Still, I tried to be positive, diving in the Red Sea without a camera is still infinitely better than being at work.

If you haven’t dived in Sharm before, you shouldn’t be put off by the term ‘local dive site’. After all, Middle Garden where the bait ball and whale sharks were spotted is considered a ‘local dive site’. We plunged into the water at White Knight and headed down. I was buddy paired with a guy called Paul who had his camera so I was going to help him find lots of things to photograph. Almost immediately, I found a good sized Giant Moray Eel which we observed for a while before moving on. One thing I have noticed is that the more I dive, the more I notice the smaller creatures that. Although we saw a good variety of marine life, the highlight for me was a tiny little Djedda Snapping Shrimp which grows to a size of just 4cm. They are generally found sharing a small hole in the sand with a small goby fish. The goby stands guard over the hole and if it is considered to be safe, the goby will move far enough out to allow the shrimp to start shovelling sand out of the hole. It was fascinating to watch this little tandem act go about their business.

Day two and a trip to Tiran was scheduled. There have been several sightings of Hammerhead Sharks recently so I was quite hopeful of an encounter. However, problems struck again as our boat, the Emperor Marcus had engine problems and we barely reached the local dive sites. While the crew, tried to establish the exact problem, we decided to dive at Fiddle Garden. Following this, another of Emperor Divers boats, the Kastan Sea was going to tow us to a second dive site and then home as by now, the crew had discovered, the engine needed some replacement parts which were not on board. After a long surface interval and lunch, the Kastan Sea towed us towards Near Garden for our second dive. Although we didn’t get to see the Hammerheads at Tiran, we still had 2 good dives. The highlights were a tiny Torpedo Ray and a ‘cleaning station’ with 3 or 4 massive Groupers and a Napoleon Wrasse waiting for the little cleaning fish to come and remove the parasites from them.

Days three and four were also both to Tiran and this time, there were no problems and we were able to dive successfully on both days. On Day Three, conditions were very calm so were able to dive on the back of Jackson Reef which has a reputation as a place to see Hammerheads. We dropped in and swam away from the reef into the blue and sat at 20m waiting. After about 10 minutes, the unmistakeable profile of a large shark. The type of shark was later of some debate. We only caught a glimpse of it for a few seconds and our view was side on so we didn’t have a clear view of the head. Hammerhead sharks get their name from a very distinctive hammer shape and they can’t be confused for any other shark on this basis. Another distinctive feature of a Hammerhead is the tall dorsal fin and this shark definitely had a tall dorsal fin. However, the discussion was that no-one got a good clear view of the head so it may be the shark was a Sand Bar Shark which has a similar body profile and dorsal fin as the Hammerhead.

After this, I took a few days break from diving before starting my last 4 days with a trip to Tiran again. Our first stop was again the back of Jackson to look for Hammerheads and we were not disappointed. I saw two Hammerheads and some of others said they saw three. The next dive on Thomas was uneventful but the on the third dive of the day, my tank started leaking air quite badly and I had to cut the dive short. A day later we were back at Tiran again and our first dive on the front of Jackson was superb with turtle, free swimming moray eel and a crocodile fish. By lunchtime, conditions were a bit calmer so it was off to the back of Jackson. I had my best sightings of 2 Hammerhead which came relatively close to our group and hung around for a while before heading back into the blue. The latter part of the dive was on the reef wall which was quite interesting with sightings of Pyjama Slug, Pipefish and a Leopard Blenny. It proved to be my last trip in the Empress Theresa which has now been sold and no longer available to Emperor Divers.

On my penultimate day, I decided to dive down at Ras Mohammed National Park which is right at the southern tip of the Sinai Peninsula. At this point, is the famous Shark and Yolanda reef which boasts wonderful marine life and the wreck of the Yolanda cargo ship which spilled its cargo of bathroom furniture along which the captain’s BMW car. The downside of having such a popular dive site is that it is invariably overcrowded. It was a fairly uneventful dive although I did manage to get stung by some Fire Coral – ouch !! The second dive site was Ras Za’tar, a favourite of mine. It’s the only place I’ve ever seen dolphins while I’ve been underwater. During the dive, we saw a turtle and 4 Napoleon Wrasse but once back on board, we saw a Marlin breaching the surface in pursuit of some little fish. It was the first time I’d seen Marlin in Egypt.

The last days diving always comes round far too quickly and it was off to Tiran again, this time with a small group which is always more relaxing. Conditions at Tiran were too rough to consider going in search of Hammerheads so we started with a dive on Gordon reef and almost immediately came across a massive Feathertail Ray which was best part of 2m in length. We briefly watched the ray before continuing with the drift dive where we found some Garden Eels. These little creatures bury themselves in the sand and come out when it is safe. From a distance, they look like some sort of plant growing from the sea bed but if you get too close, they disappear back into the sand.

My final dive of the trip was again on the front of Jackson. My first success was finding the elusive Longnose Hawkfish hiding on a large Gorgonian fan at a depth of 25m. These shy little fish are white with a red grid pattern and they almost seem to jump around rather than swim. We continued into the fabulous coral gardens and it was here I found yet another first for me – an Undulate Moray which was swimming free. Jackson can get quite crowded with divers in addition to the lunatic snorkellers who, in my opinion, shouldn’t be anywhere near Tiran for their own safety. However, it was a quiet dive and we stayed down for 64 minutes before ending the dive and my own dive trip.

This was the 3rd time I’d been diving in Sharm in August and with the exception of Ras Mohammed, it was probably some of the best diving I’ve experienced in Sharm. I’d seen a number of creatures for the first time in Egypt:

Not to mention the more dubious firsts of being stung by Firecoral and have an O-Ring go underwater.

I’ve been fortunate to dive in many wonderful places in the world and Egypt is definitely up there with the best of them. Diving conditions are generally excellent, the weather is almost always sunny and the range of marine life across a large number of dive sites means there is always something new to see on your next dive.

Surfing In The Philippines

A little in the early history of surfing 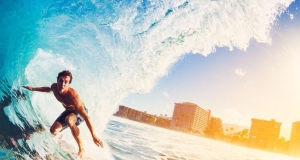